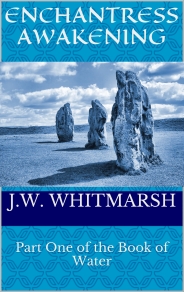 To recap, in this last series of interviews with JW Whitmarsh, author of Enchantress Awakening we have been talking about the nature of magic in the world of the Elemental Cycle. Here we continue of that theme.

Nexus: Ok, so a more general question about magic and magic learning. How common are wizards within the world of the Elemental Cycle? Would there be one in every village?

JW Whitmarsh: That’s quite a nice idea. They could be the counterpoint to the village idiot. But no, I don’t think it would be quite that common. Off the top of my head, I think a reasonable estimation would be something like for every thousand people, there’s one person who is magically-gifted and for every hundred people who are magically-gifted, one of them would be a true mage.

NX: What’s the difference between a mage and one who is magically-gifted?

JW: Plenty of people are able to work some kind of magic but only a few of them can cast spells. That’s the major distinction. Someone who is magically-gifted might be able to make magical potions or craft magical items but no amount of wand-waving would enable them to make an apple catch fire.

NX: Where do spellsingers fit into this?

JW: A spellsinger is an exceptionally talented mage, maybe even a one in a hundred occurrence among those who can cast spells. They are mages who have such an intrinsic connection to the flow of magic that they can learn spells in a fraction of the time it would take others.

NX: So they are wizarding geniuses?

JW: I wouldn’t use that term because that implies a connection to intelligence. Spellsingers are not necessarily any smarter. They are more like ‘naturals’ in sport who are already brilliant at the age of 18.

NX: How hard is it to learn magic for mages?

JW: Very difficult at first. It’s not equivalent to learning at school. It’s an entirely holistic process so at times it may more akin to learning to dance or do a martial art, at other times like learning a language and others it would be a creative process. And it won’t be the same process for everyone.

NX: So if I came into my gift today, how long would it be before I can start using spells?

JW: Assuming you’re not a spellsinger?

NX: Yes. Let’s just say I’m an ordinary wizard, if there is such a thing.

JW: It would depend on your Art and your personality. Some aspects of magic require more study some require more intuitive understanding.

NX: But if you took an average?

JW: I think after 1-2 years you should be able to do the basics.

NX: And to be competent?

JW: Oh, I think you’d need to put in your 10,000 hours like with anything else. The only difference compared to other things like a sport or playing an instrument is that you wouldn’t peak. Mages continue to gain power as long as their mind is sharp.

NX: How long do mages live?

JW: It is variable. Ageing only really happens in the Plain of Reality so the greater the connection the mage has with the various other plains the less he or she will age.

NX: Which means Summoners would be more or less immortal?

NX: And for other mages?

JW: Without the influence of these other realms I would say a mage would likely live as long as any human could if they stayed in good health. So mages would routinely live into their nineties, which in their contemporary environment where most people are stricken down with illness before they get to that age would make them seem ancient indeed.

NX: We’re going to talk more about Enchantress Apprentice nearer the release but is there any hint you can give us about how Caleigh’s magic will develop?

JW: It’s certainly very different to where it is at the beginning of Enchantress Awakening. The question is no longer whether she is a wizard and what kind she’ll be it’s more a question of what she uses her power for. She’s a much less passive learner even though she’s aware she has a long way to go and there are threats out there to which she is not equal yet.

Enchantress Awakening is available now to buy for Amazon kindle.

One thought on “Interview with the author III (part 3)”